HISTORY OF THE PARISH

In September 1984 the then Minister of Resolis and Urquhart, Dr. William G. Young, published the history of "The Parish of Urquhart and Logie Wester".  The booklet has now been transcribed into digital format and can be opened as a pdf file by clicking here.

The first 3 photographs below represent the booklet with the artwork being done by Miss Claire Macintosh, Culbokie a.k.a. Claire Stringer.

The rest of the photographs were taken by Richard Fyfe and Charles Macdonell in February 2012 as it was going through the first stage of conversion into a private house. Whilst they were able to capture images of the marble memorials, sadly now damaged, the two brass plaques, of important historical significance, weren't in a position to be photographed. The whereabouts of these plaques in now unknown although enquiries are being made. The suspicion must be that they had financial value easily obtained. One was significant in that it listed all the ministers at the time of its creation.

"Urquhart - ivy-clad kirk by the Firth"

This link will take you to a description of the original Urquhart Church on the Ross and Cromarty Heritage web site.

Modern history in the making.

Ordination of the Rev. Carol Rattenbury
Friday 22 September 2017 was a very special day for Carol and for our church and congregation. It was a pleasure and privilege to host the Presbytery of Ross as they ordained Carol into the Ordained Local Ministry (OLM) of the Church of Scotland.
The service was conducted by Jimmy Maxwell, Moderator of Presbytery and the Rev Mike MacDonald who did the ordination. We had a great evening with tremendous singing and we even had a piper (Ruraidh Jack) to pipe Presbytery in and then to lead the singing of Psalm 139 to Highland Cathedral. Both of which I think were firsts for Presbytery!
Mike, Carol's husband, has done a bit of research on the history of ordinations in Urquhart parish and it is quite interesting as they are few and far between. However, Resolis folk are a bit more used to it.
• George S M Walker (Resolis 1953-1958) was ordained to Resolis in May 1953, having previously been an Assistant Minister in St. Andrews.
Before that, you go back to...
• Robert MacDougall (Resolis 1871-1911) who had previously been a Missionary in Argyll (!), and then Assistant at Kilmonivaig. Resolis was his first actual church. (As far as can be told the Assistant Minister posts were the equivalent of today's probationers). If Assistant did count as fully ordained, you have to go back a bit further still, to...
• Robert Arthur (Resolis 1774-1821)
You do have to go back to the same year, 1774, for Urquhart!
• Charles Calder (Urquhart 1774-1812) was licensed by Inverness Presbytery, and Urquhart was his first (and only) church. So for Urquhart at least, Carol's was the first Ordination of a new minister for 243 years, and possibly for both!

Gallery of photos for Urquhart Church

In February 2012 Richard Fyfe and Charles Macdonell visited Urquhart Church and these can be viewed at the foot of the page. 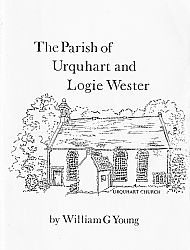 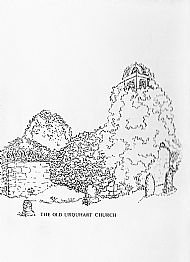 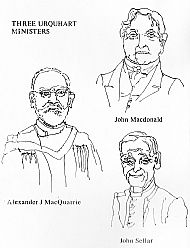 Photographs on display in vestry.

The artwork was done by Miss Claire Mackintosh, Culbokie a.k.a. Claire Stringer