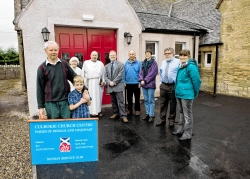 The following is an article published in the Ross-shire Journal to whom we are grateful for its availability.

A Black Isle village has been blessed with its first ever church which has been established in a former school building.
The Culbokie Church Centre has risen from the ashes of the old primary school after extensive refurbishment work over the past two years.
Richard Fyfe, Church of Scotland session clerk in the parish of Resolis and Urquhart, told the Ross-shire Journal: "We have just completed the refurbishment of the redundant primary school in Culbokie. As far as we know it is the first time in its history Culbokie village has had a dedicated church building. This is also the first new church in our presbytery for goodness knows how long."
Mr Fyfe, who lives in Culbokie, added: "It has been a very long process since we closed our two old buildings which were out in the countryside and away from the main population centre. For us, this is the culmination of a vision we had to move the church into the centre of our local community."
A dedication service will be held at the Culbokie Church Centre on Sunday, April 22.
The Rev Willis Jones, who has been locum minister for Resolis and Urquhart for almost two years, said the new church was a "dream come true" for the congregation.
The Rev Jones, who also serves Cromarty, said: "What we have now in Culbokie is a multi-purpose building that can be used for many different things.
"When the new centre was being built, people in the village were telling us now a church was in the village they would attend more. A lot of us were a bit cynical about that, but it has become a reality — we have even had to bring in more chairs.
"But our big job now is not so much to convert the village to the church but to convert the church to the village. We’re not expecting them to support us, so much as allowing us to serve them."
He added: "It’s a dream come true for the congregation. I’m so proud of them, they have been a real inspiration to me. There were times when they didn’t think it was possible. It’s just remarkable the sacrifices they’ve made to get the job done."
The Rev Jones praised the efforts of his predecessor, the late Rev Grant Bell, who was minister of the parish from 2002 until 2010.
"The Rev Bell was the person who worked hardest for this before he retired, sadly he passed away last year," he said.
The Rev Jones, who is originally from America, was previously minister at Kirkhill and Kiltarlity before he moved to the Black Isle.
The Rev Alasdair MacLennan, who was minister at Resolis and Urquhart between 1994 and 2001, explained the history of the parish: "The roofs at the churches at Resolis and Urquhart, which were build in the 18th century and are both listed buildings, were badly in need of repair.
"It would have cost too much in repairs.
"Both churches had served the generations well over the years but it was decided to sell both the buildings. Services were held in Findon Hall until the old primary school became available."
He added: "The church is now in the centre of a developing community where there is every opportunity to expand the congregation."